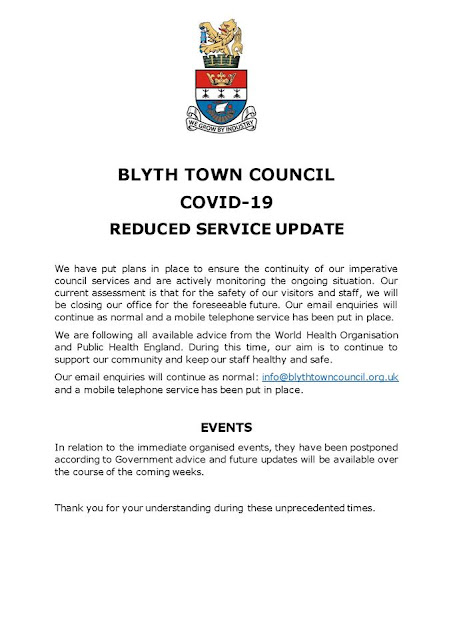 Posted by Alisdair Gibbs-Barton at Wednesday, March 25, 2020 No comments:

I run a small model shop here in Blyth. We benefit from the small business exemption, and so after the exemption is applied pay no business rates.

As the corona virus started to get a hold, we noticed that we were getting fewer customers, and with this week's announcement we have closed the shop to the public.

The budget announcement of grants to businesses such as ourselves was welcome, and with the thought of financial help we accepted the inevitable. This was further reinforced by the chancellors subsequent announcements.

We will continue to provide a very limited on-line business, but we are a small, local, business, and we are now in real danger of going under. The grant will make the difference between closure and survival.

However, we have had no news, no correspondence from government or Northumberland County Council.

I appreciate that we are one small business in the county, country and international scheme of things, but we cannot survive on announcements.
Posted by Alisdair Gibbs-Barton at Wednesday, March 25, 2020 No comments:

I'll try to post details of any that arise in the meantime
Posted by Alisdair Gibbs-Barton at Tuesday, February 25, 2020 No comments:

I think that there are only two meetings at Blyth Town Council scheduled for Febrary.

They are at Arms Evertyne House, starting at 6:30 pm


I understand that there are no meetings scheduled for March
Posted by Alisdair Gibbs-Barton at Sunday, February 02, 2020 No comments:

Posted by Alisdair Gibbs-Barton at Monday, January 20, 2020 No comments:


I think that here are only three meetings scheduled for January. They are:-

All meetings are at Arms Evertyne Huse, and start at 6:30 pm


Posted by Alisdair Gibbs-Barton at Saturday, January 04, 2020 No comments:

Once upon a time Fred was a member of a golf club. He got all the benefits of membership, subsidised meals, cheap golf, discounts in the club shop, parking closer to the clubhouse and access to changing rooms etc. One year he thought, it’s costing me money every year to be a member, I think I’ll leave and save the membership money.
After he left he went to his old club for a game of golf. He had to park further away from the clubhouse, but that was no problem. He had to pay full non members rate for a round, and then only on days when he could get a day rate. He had to change in his car, but that wasn’t a great problem.
He wondered why members of the club were a bit sniffy to him, and why he had to drink alone in the guests lounge. They reminded him that he could only play at the club, as a non member a limited number of times a year. His former friends and fellow members talked about the things that we going ahead at the club - but reminded him that he couldn’t have a say at the AGM or benefit from them.
He had to pay full price in the golf pro’s shop, and if he could get access to the dining room he had to pay full price.
He tried another golf club, but they wouldn’t let him have a round as they only let members of the club, and other clubs in most days, but he could come back next Tuesday before 9 and have to be off the course before 12. And pay full rate for his golf.
So remember, being a member of something might cost money, but the benefits often outweigh the negatives.

Posted by Alisdair Gibbs-Barton at Monday, December 09, 2019 No comments:

Alisdair Gibbs-Barton
Blyth, Northumberland, United Kingdom
I'm .. let's just say I have now hit the big 6 - 0 !! I'm married to Sheila with a grown up son, Andrew,and a grandson, Alban. My interests are many and varied, and as I complete this "blog" I'll introduce you to a few of them. I live in Blyth, Northumberland, and I'll try to post things that affect Blyth, and specifically South Blyth and Plessey Wards.. I have recently opened a model shop , selling kits, wargames figures and modelling materials; including internet and mail order sales. I offer help ( at very reasonable rates ) to genealogists through our outlet oth-research.co.uk To keep any political legalities: Published and promoted by Alisdair Gibbs-Barton of 18 Fulmar Drive, Blyth, NE24 3QG. Hosted by Blogger My words are Copyright (c) A Gibbs-Barton, and may not be reproduced without permission. This even applies to pages which have been deleted from the live blog, but which may appear in your "cache"